A member of the Giga'at First Nation and Prince Rupert resident is one of six British Columbians or BC based groups to be recognized by the BC Achievement Foundation as part of the Reconciliation Award program for 2022.
Brendan Eshom has been noted for his work in advocacy of the Ts'msyen Nation and his dedication towards the language of the Nation and its people.
In their notes related to the award the BC Achievement Foundation notes of his work through SD52's language program and the creation of a website that is dedicated towards Sm'algyax 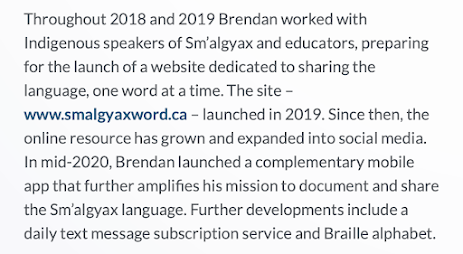 You can review the full biography of his work here.
The Charles Hays graduate and class valedictorian of 2020, is currently a student at the University of British Columbia, he is studying in the Faculty of Science at the Vancouver university.
We've taken a look at some of Mr. Eshom's work over the last few years, both on his language project and through his time at Charles Hays Secondary School,  our notes on his achievement can be reviewed below:
July 2021 -- Sm'algyax Word gains Braille option as locally created language program expands
November 2020 -- 2021 edition of the Prince Rupert Chamber's Rising Starts program opens the application period
November 2020 -- Appy Birthday to the Sm'algyax word App, poular local initiative continues to grow and spread the words of the Ts'msyen
July 2020 -- MLA Rice shares some Sm'algyax salutations for the Legislature and word of Brendan Eshom's news language project
July 2020 -- Want to work on your Sm'algyax ... there's an app for that!
March 2020 -- Rainmaker's Repeat ... Rainmakers Repeat! Charles Hays claims second consecutive Provincials banner with 67-45 victory over King George
July 2019 -- CHSS Student Debaters to make their voices herd in 25 hour fundraising speakathon
The Nomination process for the BC Achievement Foundation  Reconciliation Award opened on November 15th of last year, closed on January 15th, with the list of Awardees revealed today,
More on today's announcements and award winners can be explored here.
Further Community Notes for Prince Rupert and are can be reviewed here.
Cross posted from the North Coast Review.
Posted by . at 2:36 PM