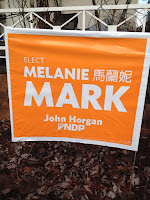 Melanie Mark made history last night as she became the first ever full First Nations woman to become a member of the British Columbia Legislature.

While she was born and raised in the Mount Pleasant area of Vancouver, through the campaign, she made frequent mention of her Nisga'a and Gitxsan roots, highlighting the pride she had in her ancestry and receiving assistance from those from the Northwest that have moved to that part of the province.

Her familiarity in the urban area of Vancouver and the issues of First Nations residents living there became a key element to her campaign for the provincial By-election in Vancouver-Mount Pleasant, a riding with a strong First Nation population and a long time strong hold for the NDP in the Legislature.

Among her impressive credentials to take into the Legislature will be her time working with Mary Ellen Turpel-Lafond at the Office of the Representative for Children and Youth, working to watch over the most vulnerable children and youth in the province.

Her election on Tuesday evening, will provide the NDP with a knowledgeable and passionate asset to bring into the debate in the legislature, particularly one imagines when it comes to issues related to the troubled Ministry of Children and Family Development.

A guest column in the Georgia Straight of January 30th outlined her experiences, including some time in the Hazleton's, that led her to seek office and the issues she hopes to raise in the Legislature.

Her video introductions to the voters highlighted some of the issues that she campaigned on during the by-election campaign, themes that clearly resonated with voters last evening.

The Vancouver-Mount Pleasant riding was last represented by MLA Jenny Kwan who shifted to the Federal scene during last fall's Federal election.

Ms Mark claimed victory with over 60 percent of the vote and 5,353 in total.

The full results from last night can be found below.


Ms. Mark was one of two successful NDP candidates last night, with Jodie Wickens a long time advocate for children with autism also claiming victory, she had 3,562 ballots cast in her favour or 46.2 percent of the vote in Coquitlam-Burke Mountain constituency.

The twin wins bring the NDP to 35 seats in the 85 seat provincial legislature.

Some notes on Ms. Mark's by-election campaign can be found below:

You can find more items on the British Columbia Legislature here

Cross posted from the North Coast Review
Posted by . at 9:30 AM