Through much of the summer and now into the fall, Skeena-Bulkley Valley MP Nathan Cullen has been part of a cross Canada engagement process to take the pulse of the nation on the theme of electoral reform.

The MP has hosted a number of community meetings across Canada with some stops in the Northwest along the way, as the Committee on Electoral Reform engaged those Canadians that had an interest in the theme.

A session held in Prince Rupert provided some feedback for the MP, with the meeting at NWCC offering up some agreement with the need for change to the system, but with a range of opinion on how to approach it.

Along with that consultation, some residents have taken to comments on social media or through the op-ed page of the weekly paper to share their thoughts, one of those contributions came from Prince Rupert City Councillor Blair Mirau who outlined his support for a system of ranked ballot representation.

The Skeena-Bulkley Valley MP used the op-ed page himself in September, making use of the editorial page to offer a response to Mr. Mirau's submission and expand further on his preferred option, that of the proportional representation concept.

The first of the early results from some of those Cross Canada engagements have been released with the NDP providing their briefing notes on the topic last week, offering up their interpretation as to where Canadians stand on the issue.

Locally, Mr. Cullen delivers some thoughts on his engagement on the issue in the Northwest provided through his recent home mailer to the residents of Skeena-Bulkley Valley. Outlining some details on the findings from his community information sessions, which also included a telephone town hall.

From those engagement sessions the MP has noted the results of three questions that were posed as part of the New Democrat MP's polling process to those residents who participated.

When it comes to reforming our voting system, what is the most appropriate way for the government to go forward?

Do you think Canada should change the voting system to a proportional one?

The complete presentation delivered to Northwest homes can be viewed below: 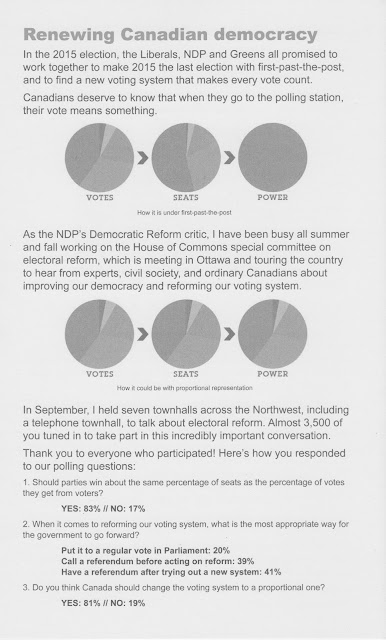 Some of those themes from Mr. Cullen's survey will spur on further debate both in the local riding and across the nation as the Committee works towards the finish line of December.

Though one concept from Question Two, that of test driving the proportional representation option without first taking the change to the public may find a bit of resistance for voters.

The Conservative party has already telegraphed their objections to that prospect, while the Liberals haven't been particularly clear on how they would react to the idea of a major shift to the electoral process without voter assent.

All of which points towards that proposal being an approach to participatory democracy that may raise a few eyebrows from the voting public.

While the goal of reforming the Canadian Parliamentary system is always something worthy of further exploration, the final decision on any change should rest with those that have sent the MP's to Ottawa.

If those politicians who are in favour of the Proportional Representation proposal can sell that concept to the public as an idea worth moving forward on, and judging by Mr. Cullen's findings it's one that may find success, then the politicians would surely have no problem in testing the winds of change by referendum before any new process is put in place.

Allowing the voters to hold the final say on how to change their democratic process, would surely seem for most of us to be the most "democratic approach" to the whole issue.

We have been following the progress of the Electoral Reform Committee from our Darcy McGee political portal, you can review some of the latest entries to that archive page here.

More notes on the work of Mr. Cullen in the nation's capital can be found on our House of Commons archive here.

Cross posted from the North Coast Review.
Posted by . at 9:35 AM