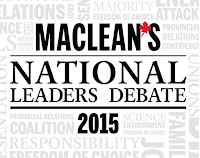 The process of delivering this years version of the Leader's Debates has made for a fair bit of controversy, with the Major TV network consortium shut out to this point from any collection of the leaders of the nations five most recognized parties.

Even the precise number of leadership discussions has yet to be agreed on and we imagine some of what happens at tonight's Maclean's debate will frame much of what we see as far as leaders engagement over the next ten weeks.

Maclean's Paul Wells will be holding the stopwatch and directing the traffic for this evening's session, which will be broadcast over the air in those communities which have access to CITY TV feeds.

Or, in a nod to the growing importance of the internet to the dialogue on political happenings, the Maclean's forum will be available through the Maclean's online website, the magazines Facebook Page as well as websites for CPAC and OMNI TV.

The introductions, opening remarks and first salvos of debate start up at 8 PM ET, 5 PM Pacific

For those that may not be able to watch this evenings event, Maclean's will be reposting the debate to their YouTube channel once the spotlights go out later this evening.

Some background on how the leaders prepared for this evenings opening night can be found from our National Election Roll Call for August 5th.